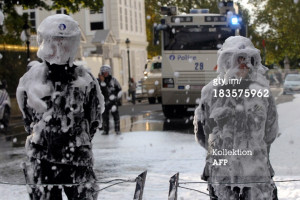 Fifteen years ago this month, the French sheep farmer Jose Bové revved up his bulldozer and dismantled a McDonald’s. No matter how you slice it, this is one of the most memorable instances of a worker using the tools of their trade to take direct action. It all came about because he was beyond distraught at the United States for levying taxes on his beloved Roquefort cheese in retaliation for European farmers refusing to import U.S. hormone-fed beef. “McDo’s ,” as Bové called it, was the ultimate symbol of the destruction of French cuisine, embodying the problems with corporate globalization.

When called to trial, he came by oxcart, carrying a large wheel of locally-produced Roquefort cheese. These and other actions that featured agrarian tools and products helped to plant Bové as an international symbol of small farmer and community resistance to corporate globalization.

In honor of his outstanding use of implements of his trade, here are nine more examples of farmers, janitors, musicians and fire fighters wielding their own ordinary tools in