Have we entered a golden age of global activism? Uprisings have been sprouting regularly for several years, grabbing headlines and changing political agendas at the highest levels. What, if anything, do these various movements have in common?

The inspired new documentary from the Riahi Brothers, Everyday Rebellion, answers this question by focusing on method. The film lovingly examines contemporary global nonviolence in its diversity and creativity, building on recent academic research showing that nonviolent resistance movements have been twice as effective in the past century in achieving their stated goals compared with violent resistance movements.

What was your inspiration for making this film?

Arash Riahi: It was going to be a film about Iran, and it was even called Iran Revolution. And then history kind of overruled us. The Arab Spring happened – no one expected that. 2011 was a year in which a lot of things were happening all over, and we started to see a pattern, a pattern of horizontal revolutions, uprisings with no leadership, where the people did their own media. We thought, O.K., let’s analyze that. We realized there is a connection and that if we want to make a film that remains in time and one that you can learn from – without making it too preachy – we have to make it universal. We cannot go into what’s happening in daily politics here or there. We have to find out what is this core, inner logic or inner element of all these fights.

Posted on December 30 2013 by Ines Khannoussi 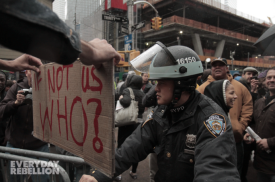