Director Arash T. Riahi describes Everyday Rebellion as a celebration of life, and he encourages viewers to see this film with optimism. It is impossible, however, to resist the abysmal feeling this documentary instills on those watching. One of the most powerful and engaging documentaries to come out of the industry in the last decade, Everyday Rebellion is powerful not only due to its heavy political theme, but in the way it commands the documentary medium, reclaiming it and reminding us of how intrinsically capable of education it is.

Everyday Rebellion explores the way creativity has become a newest weapon at an activist’s disposal, and shows how small, peaceful protests have changed civil disobedience. It reinvigorates a hope for peace in a world that oftentimes seems hopeless and features some amazing profiles of groups from around the globe.

The documentary is heavy when it comes to political content, having dictatorship and lack of democracy at its center. It has an interesting mixture of a terribly serious premise, but with bright and dynamic imagery that shows horrific episodes in the political lives of nations, but also lighthearted and amicable instances in which people come together in order to help a cause move forward. 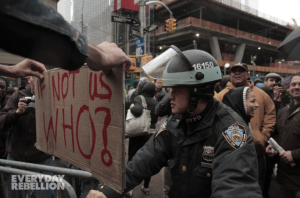