A battered pan lid sits next to a crudely printed teacup, alongside other odds and ends that look more like the sort of stuff you’d pick up in a jumble sale than exhibits you’d expect to see at a national museum. Yet these humble bits and bobs, on show at the V&A in London, have helped to win rights, change laws and even topple governments. 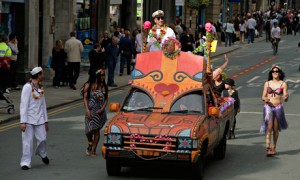 “We wanted to show the collective power these domestic objects can have when grabbed and repurposed with political intent,” says Gavin Grindon, co-curator of Disobedient Objects, an exhibition that gathers together tools of protest from around the world. While shows of activist art are not uncommon, this is the first major exhibition to focus on the actual instruments of direct action. As co-curator Catherine Flood says, “It is design taken out of the hands of designers.” As such, it has a refreshingly frank power, a collection of tools made or redeployed for specific – and often desperate – ends. 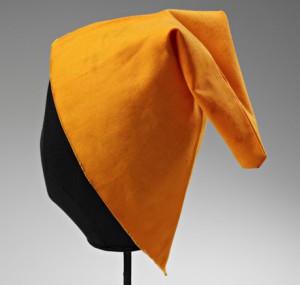 “The police just don’t know what to do with things like this,” says Grindon. “Do they throw the inflatable back, in which case they’re engaging in this weird performance? Do they try to bundle it into a van and arrest the cobblestone? Or do they try to attack it and deflate it?” Either way, as accompanying footage shows, they end up wrongfooted and humiliated, their authority brilliantly undermined by an ingenious reference to the traditional tool of the street protestor.